Man Charged in Robbery is Sought

SAVANNAH, GA (October 30, 2014): Armed robbery charges have been filed against a 43-year-old Savannah man and Metro Police are asking the public to help locate him. 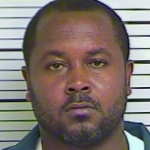 has been identified as the suspect who robbed a 19-year-old man who had just given him money to help him with expenses on Oct. 21.

After the victim gave the robber money the suspect produced a knife on near West 41st and Howard streets and demanded the rest of the victim’s money.