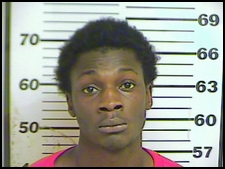 SAVANNAH, GA. (January 27, 2014): Violent Crimes detectives from the Savannah-Chatham Metropolitan Police Department are seeking help from the public in locating a man wanted for questioning in a Jan. 12 robbery and shooting on the southside.

Robbery detectives would like to question Kevin Genard King, 22, who is known to frequent the Chatham Street area. He is a black male standing 5-10 weighing 140 with short black hair.

Detectives are investigating the shooting of Jo Ann Starr, 48, at her residence on Forest Ridge Drive about 4:35 p.m. that Sunday. She reportedly was involved in a discussion with two males who came to her house and was shot.

One suspect, Shawn Wallace, 21, of the 2400 block of East 40th Street, was taken into custody fleeing the scene as Southside Precinct officers responded. He has been charged with armed robbery, aggravated assault and possession of a controlled substance (cocaine) with intent to distribute. Since his arrest he has been charged with contempt of court and violation of parole.

Anyone with information on the case or King’s location is asked to call Crimestoppers at (912) 234-2020 or text CRIMES (274637) using the keyword CSTOP2020. Tipsters remain anonymous and may qualify for a cash reward.