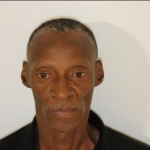 SAVANNAH, GA (November 18, 2014): A homeless man has been charged in two cases and investigations are underway to determine if he was involved in others after he was identified on a video using a credit card stolen in a burglary.

Nathaniel Snowton, 53, was arrested by Downtown Precinct detectives who identified him on videos from stores where stolen credit cards had been used after a Nov. 7 burglary.

A woman from Florida had reported that someone had entered a short-term rental house where she was staying on East Bryan Street during the night and taken credit cards, cash, canned drinks and food items. Responding detectives learned the cards had been used at several stores.Snowton was detained

Monday at an inner city night shelter and was charged with four counts of financial transaction card fraud and two counts of credit card theft with other charges pending.

Today, another Downtown Precinct detective charged Snowton with theft of another woman’s purse from a City Market restaurant. Restaurant video showed a man reaching through a fence surrounding the restaurant’s deck to take the purse. The purse was found at another restaurant on East Park Avenue. Investigators are trying to determine if he is involved in other incidents.

Snowton is on parole on burglary charges from Chatham County and theft by receiving from Clark County. He was released from Hancock State Prison eight months ago.