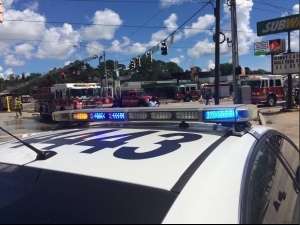 Investigators say James Lester, 87, died at the scene after he attempted to cross Bull Street in a Chevrolet Blazer. His vehicle crossed into the path of a Toyota Prius driven northbound on Bull by John Grogan, 61. Grogan was unable to stop before striking the passenger side of Lester’s SUV.

Following the collision, Lester then accelerated through the parking lot and drove directly into one of the gas pumps. Lester’s vehicle flipped onto its driver’s side, trapping him inside as the vehicle and gas pump caught fire.

Savannah Fire responded to the accident and successfully extinguished the flames as Metro officers rerouted traffic out of harm’s way.

The collision remains under review by MAIT.