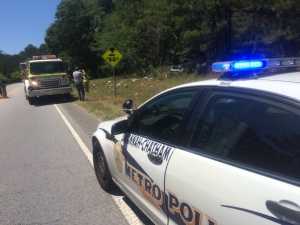 SAVANNAH, GA (May 4, 2016):  Savannah-Chatham Metropolitan Police Department’s Major Accident Investigation Team responded to a one-vehicle accident at approximately 12:30 p.m., May 4, in the 500 block of Fort Argyle Road that resulted in serious injuries to an Atlanta woman.

Autumn Minnicks, 37, was driving eastbound on Fort Argyle Road and attempted to navigate a curve at a high rate of speed when she lost control of a 1999 GMC Jimmy. Minnicks was ejected and thrown from the vehicle as it rolled several times and came to rest in a ditch. She was transported with serious injuries to Memorial University Medical Center, where she remains in stable condition.

Roads are now reopened following the accident. This is an ongoing investigation as MAIT works to determine the exact cause of the crash.