Undercover officers were conducting surveillance on a group of individuals outside an apartment on Westlake Avenue around 5:45 p.m. when they observed several large bags of marijuana being distributed among the group. When the undercover officer approached along with marked detectives in marked police vehicles, the group scattered, discarding the drugs and a firearm. The suspects and the discarded drugs were located.

A K-9 also conducted a free air sniff around three vehicles involved in the suspected drug activity. Searches of the vehicles resulted in more drugs and a gun.

The investigation resulted in the seizure of 1,563.8 grams of marijuana, 21.8 grams of crack cocaine, 2.1 grams of heroin, 7 Ecstasy pills, 28 Oxycodone pills, five digital scales, two stolen firearms and $1,026 in currency. 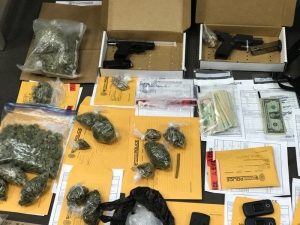