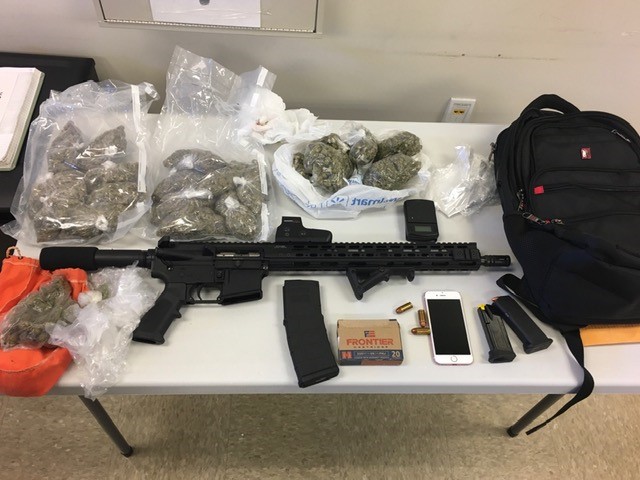 SAVANNAH, GA (May 8, 2020) – A traffic stop May 3 led Savannah Police officers to arrest a wanted subject in possession of drugs and a gun.

A Strategic Investigation Unit officer was patrolling in west Savannah when he observed a vehicle fail to stop at a stop sign. The officer attempted to initiate a traffic stop on McIntyre Street. The driver, who was later identified as Terrell Edwards, 20, attempted to flee on foot before being taken into custody. In his vehicle, officers discovered 1.48 lbs. of marijuana, drug paraphernalia and an AR-15 rifle.

Gangs, guns and drugs has been a primary focus for Savannah Police Department under the leadership of Chief Roy Minter. Since his arrival, the department has reallocated staffing and units to better address these concerns and remains committed to removing these dangerous elements from Savannah streets. In addition to extensive investigations by specialized units, officers continue to discover drugs and guns while conducting routine traffic stops. To date in 2020, the Violent Crimes Task Force has recovered 56 guns, 7,149 grams of marijuana, 0.9 grams of marijuana, 80.56 grams of crack cocaine, 56.9 grams of powder cocaine, 22.6 grams of crystal meth, in additional to more than $6,000 and additional drugs.

SPD asks the public to assist in its mission to reduce the amount of drugs and guns that are illegally obtained or used during crimes. Anyone with information on these illegal activities can send tips to the SPD Crime Tip Line at (912) 525-3124 or to Crimestoppers at (912) 234-2020. Tipsters remain anonymous. Tips can also be submitted through a CrimeStoppers online tip portal at https://www.p3tips.com/tipform.aspx?ID=757. Tipsters may qualify for a reward up to $2,500, depending on the severity of the crime. More information on the process of submitting a tip and how rewards are processed can be viewed at http://www.savannahchathamcrimestoppers.org/About_Us.cfm