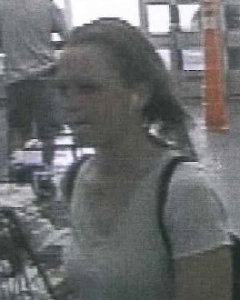 Can you help identify this woman? 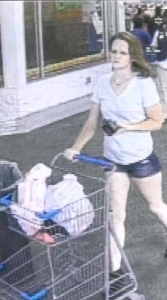 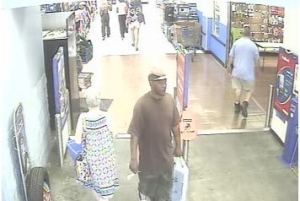 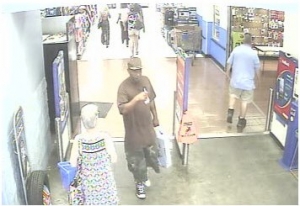 Surveillance footage has been obtained in a credit card theft case from June 4. A female suspect is seen exiting the Wal-Mart located on Ogeechee Road after making a purchase on a stolen credit card. The suspect is described as a white female of average height with auburn hair. She wore a white t-shirt, blue jean shorts and black shoes during the incident.

Another suspect is caught on surveillance footage, June 22, at the Chatham County Aquatic Center after he broke into the victim’s vehicle. Personal belongings were left in plain sight. Purchases on the victim’s credit card were then made at a nearby Wal-Mart. He is described as a middle-aged black male of an average height. He wore a black hat, black t-shirt, camouflage shorts and dark shoes during the incident.

In the early morning hours of July 1, Metro responded to a burglary at the BP Gas Station at the intersection of Skidaway Road and Eisenhower Drive. Two suspects reportedly entered the business after prying open the front door. The suspects were able to get away with an undisclosed amount of cash and other store merchandise. A black GMC SUV with possible sun damage on the roof was used during the incident. The suspects are described as two black males between the ages of 20 and 30. They wore dark clothes during the incident.

Anyone with any information on these cases should contact SCMPD’s tip line. The tip line is open directly to investigators by dialing (912) 525-3124.

Information may also be forwarded to CrimeStoppers at (912) 234-2020. Tipsters remain anonymous.