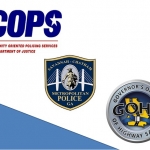 The U.S. Department of Community Oriented Policing Services’ 2016 COPS Hiring Program (CHP) will provide SCMPD with $1,875,000 in federal funds over a three-year period to hire 15 new officers, with a local match of $812,247.

Officers hired through the grant will enhance SCMPD’s existing community oriented policing initiatives. The COPS grant promotes the use of partnerships and problem solving techniques to proactively address conditions that lead to public safety issues such as crime, social disorder and fear of crime.

The Georgia Governor’s Office of Highway Safety’s has also awarded the SCMPD a H.E.A.T. grant, which stands for Highway Enforcement of Aggressive Traffic. The $249,975 grant will fund two traffic officer positions and  two new vehicles for SCMPD’s Traffic Unit. SCMPD will purchase a third matching vehicle and hire a third officer. The three vehicles will be fitted with H.E.A.T. logos and dedicated solely to SCMPD’s implementation of the H.E.A.T. initiative.

The H.E.A.T. initiative has a focus on intensified traffic safety and enforcement. Officers assigned to the H.E.A.T. Unit will partner with neighboring police jurisdictions and community organizations in providing traffic safety education programs for citizens. These officers will also carry out local implementation of national highway safety campaigns such as “Click-It or Ticket” and “Drive Sober or Get Pulled Over”. SCMPD’s H.E.A.T. Unit also will have a focus on apprehending impaired drivers and speeders which will lower motor vehicle accidents.

“I am very pleased with the time and effort SCMPD personnel devoted to procuring these grants,” said SCMPD Chief Joseph H. Lumpkin, Sr. “I am even more pleased with the fact that these funds will allow us to expand SCMPD resources, services and officers protecting our citizens — with a minimal cost to local taxpayers.”

Implementation actions for both grants will start by early 2017.