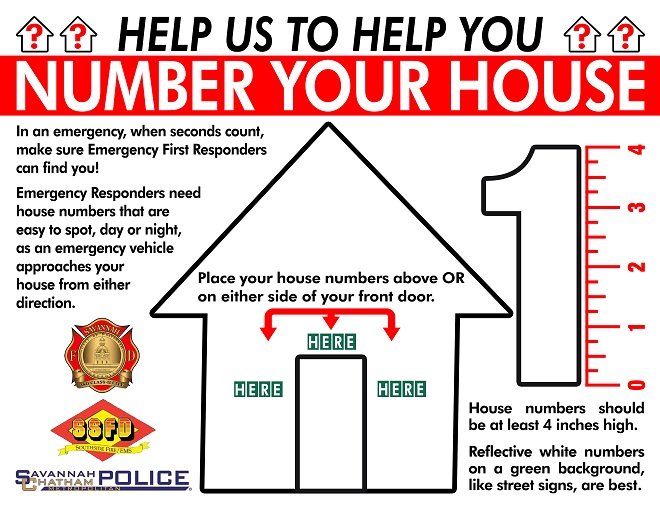 SAVANNAH, GA (July 17, 2013): Savannah-Chatham Metropolitan Police Central Precinct officers take their roll call to the streets again Saturday and this time they are bringing help and a new message.

The third “Roll Call in the Street” of the summer begins with a free hamburger and hot dog cookout — gratis of sponsoring businesses — at 1 p.m. at the park at Dillon and Sherman Avenues in the Tatemville area. The actual Roll Call in which oncoming afternoon shift officers get their marching orders for the day takes place at 2:30 p.m.

But along with the Roll Call, cookout and static displays of SCMPD Special Operations units, will be extra officers assigned to the hard-nosed “Operation Total Focus” that will be taking place that night and the following day.

In addition, they will be joined by Savannah Fire & Emergency Services firefighters and Southside Fire Department emergency medical technicians to kick off a program to convince the public to identify their residences with address numbers.

If it sounds like a reason to party, it is: but it has a very serious meaning.

“The Roll Call and cookout are our efforts to build relationships with the community we serve and they serve a dire purpose,” said Capt. DeVonn Adams, Central Precinct commander. “We can’t be everywhere at all times and these relationships are crucial to identify illegal activities and the people who commit them.

“Protecting this community takes a joint effort between Police and residents and these events are designed to create and enhance those relationships so residents will feel more secure in reporting crimes and identifying suspects.”

Adams initiated the Roll Calls in 2012 as part of his “All Hands on Deck” initiative in reaction to Police Chief Willie Lovett’s directive to attack the usual increase in crime over summer months. The initiative, which included officers of the precinct delaying days off, focusing on in-depth patrols and the roll calls helped decrease crime during the summer by 30 percent.

“Total Focus” is a new addition: This will be the fourth time this year that the additional officers will be assigned to saturate areas where crimes have been reported to seek out those responsible and get them off the streets. This is the first time Metro has announced the operation before it has taken place and Police are hoping residents find impressive the sheer numbers assigned to protect them.

Savannah Fire and Southside EMS are joining Metro to highlight the problems they encounter trying to respond to emergency situations without the aid of address numbers on the buildings. At a time when seconds are precious, delays to identify the addresses can threaten lives. Police, firefighters and EMTs will be passing out information showing how house numbers least four inches tall should be displayed above or near the front doors.

Address numbers actually are required by the City Code of Savannah with criminal consequences but the first responders are taking a softer approach to the issue at this time.

“We are hoping the residents see the value in helping emergency vehicles find them in times of need and will voluntarily join us in this effort,” said Central Precinct Crime Prevention Officer Willet Williams, who started the initiative.