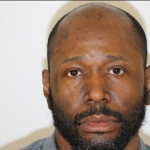 SAVANNAH, GA (February 26, 2015): The fiancé of a woman found dead in her apartment Feb. 18 has been charged with her murder by Savannah-Chatham Metropolitan Police.

Willie Moore Jr., 38, was arrested today by Violent Crimes detectives investigating the death of Mandi DeAnne Kaiser, 37, of the 12000 block of Apache Avenue.

Southside Precinct Patrol officers discovered her body when they responded to family members’ concerns about noon Feb. 18 and a death investigation began. It became a homicide investigation after police received the results of an autopsy the following week.