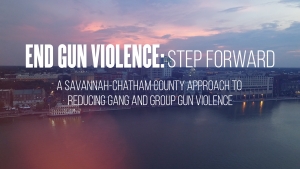 SAVANNAH, GA (July 8, 2016) – In December 2015, City of Savannah officials launched the End Gun Violence:  Step Forward (EGV) initiative with a “call-in” in response to the escalating violence by gangs and other street groups. EGV is modeled on the Group Violence Intervention (GVI) developed by Professor David Kennedy of the National Network for Safe Communities at John Jay College of Criminal Justice.

Between Jan. 1 and June 30, 2016, Savannah experienced 29 homicides. Although the rate of homicides during this six month period is unacceptable (an average of four per month), it is significantly less than the rate of homicides in the three month period of October through December 2015 (which was seven per month).  Local, state and federal law enforcement agencies, as well as the citizens of Savannah, remain concerned about the city’s homicide rate.  EGV is currently implementing a number of proactive strategies to better address the rising rates of homicides and nonfatal shootings in Savannah.

Though the name is End Gun Violence, it is important to note that its primary focus is on group and gang violence.  Cities nationally find that under half a percent of the population – mostly members of groups and gangs – drive 50-75 percent of violent offending and victimization.  Savannah is no exception.

EGV is built upon a partnership between law enforcement, social service providers, and community/neighborhood representatives who work cohesively to engage directly with identified members of violent groups to let them know the community cares about them but will not tolerate violence. A key communication method is the “call-in,” a face-to-face meeting where the EGV coalition speaks to group members and gives them 1) a credible moral message against violence, 2) notice of the legal consequences for future violence, and 3) a genuine offer of help. This approach has worked in cities across the country and it will work in Savannah.

Members of violent groups and/or their associates are identified and mandated to attend the call-in where they hear from EGV Partners: SCMPD, the District Attorney’s Office, the U.S. Attorney’s Office, Southern District of Georgia, and the Mayor. The message is simple: “We want you safe, alive, and out of prison and we are working with social service agencies that will provide help for you to successfully turn away from your current lifestyle. However, the next group that commits a homicide and the most violent group in the city will feel all of the force of collaborative law enforcement directed at their entire group.”

Though arrest rates for violent crimes have increased, law enforcement is not the sole focus of EGV. A Community Police Response to Victims of Violence (CPRVV) team will be formed that meets with families who’ve been impacted by group violence to identify ways to help when a loved one is a victim.  All of the partners of EGV care about and support the most vulnerable families of Savannah.

Community representatives play a very important role in giving a moral message to perpetrators of violence: the violence is hurting the community and must stop.  Members of the community share the moral message at EGV call-ins following remarks from local, state, and federal officials.  The audience hears from a person who previously lived a lifestyle of violence, was incarcerated, and chose to leave that lifestyle.  They also hear from a person who lost a loved one to gun violence.  At the most recent call-in, many in the audience were moved to tears while listening to Pam Abraham share her story of the loss of her son. Following Ms. Abraham’s message, Larry “Gator” Rivers gave a passionate plea for the violence to stop.  After the call-in, several mandated attendees approached event organizers to express a desire to leave their life of drugs and group/gang violence.  Some stated they had no idea their choices were causing so much pain.

EGV offers help to members of groups and gangs. With the Salvation Army as the Lead Social Service Agency, the social service partners provide assistance with immediate needs such as housing, substance abuse counseling, as well as traditional services such as job training and education. The Support and Outreach Coordinator, Frederic Green, has the lived experience of being in a drug organization, growing up in the Regional Youth Detention Center, and going to prison repeatedly.  That was 16 years ago.  Now he’s married, a homeowner, an entrepreneur, and has an earned master’s degree in social work. He shared his story at the call-in and told group members that he is committed to helping them leave the street life. Frederic works with the social service work group, neighborhood associations, and various community groups to connect people to the help they need.  Additionally, he leads a peer support group that mentors and walks alongside persons who want to change their lifestyle.

The leaders of EGV realize their efforts may not end all group and gang gun violence; however, that is our idealistic goal. To date, EGV efforts have focused on building a solid infrastructure so the initiative can be sustained for years to come.  It is a process, not an event; a strategy, not a program.  Therefore, laying a proper, solid foundation is critical for sustenance. EGV requires a paradigm shift – a new way of thinking – for all of us.  In the words of Chief Lumpkin, we all have a role in the shared responsibility of keeping Savannah safe and beautiful.  EGV is working to do its share.