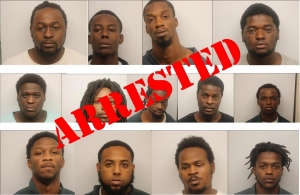 SAVANNAH, GA (March 3, 2017) – Savannah-Chatham Metropolitan Police Department, along with its law enforcement partners from the federal, state, and local levels, has recently arrested 13 individuals affiliated with the Gangster Disciples gang.

After the “Call-in” on Nov. 1, the Gangster Disciples were the first group to commit a homicide, which immediately violated the message and terms of the Call-in. Trejan Jones, 19, is charged in the Nov. 8 homicide of Anthony Grant. Both Jones and Grant are associated with the Gangster Disciples, but the murder of Grant placed the entire group/gang under the microscope of End Gun Violence.

Capt. Gunther said, “This group selected themselves because they were the most violent group/gang after the Nov. 1 Call-in. This law enforcement action is an example that the End Gun Violence: Step Forward initiative means business. When we say we are going to go after the gangs and groups who are committing gun violence in this city, we are serious, and our federal, state and local partners are serious. The violence has to stop.”

The End Gun Violence initiative and this enforcement action are possible because of our strong partnerships with the U.S. Attorney’s Office, Chatham County District Attorney’s Office, the Georgia Department of Community Supervision, the U.S. Marshals Service, the FBI, the DEA, CNT, and SCPSS Police.

Jamareiy Bartley, 20, was arrested and charged with possession of marijuana with intent to distribute, possession of a controlled substance, driving under the influence, serious injury by vehicle, and possession of a drug-related object for use.

Anthony Byrd, Jr., 23, was arrested and charged with possession of a controlled substance and probation violation.

Jaquan Byrd, 19, was arrested for a probation violation.

Ivory Carter, 31, was arrested and charged with possession of a firearm by a convicted felon, obstruction, false name/address to police, possession of marijuana less than one ounce, improperly tinted windows, no seatbelt, driving with a suspended or revoked license, and possession of a drug related object for use.

Rakeem Carlton, 25, was arrested and charged with possession/delivery of a controlled substance with intent to distribute.

Tori Davis, 27, was arrested for outstanding warrants from a neighboring county.

Anthony Haynes, 30, was arrested for a probation violation.

Trejan Jones, 19, was arrested and charged with murder, malice murder, aggravated assault, and possession of a firearm/knife during the commission of a crime.

Cyle Talley, 21, was arrested and charged with carrying a pistol without a license, possession of marijuana less than one ounce, and walking in a roadway.

The End Gun Violence initiative is not just about locking people up. “Our overall message is that we want individuals and their families safe, alive, and out of prison, if they are not causing harm,” said Capt. Gunther. “We want group/gang members to turn their lives around, but we will not tolerate them causing harm.  We also want family members of group/gang members to realize their loved one’s association with a group/gang tremendously raises the violence risk to their personal families.”

So far, 10 group/gang members have accepted help through the End Gun Violence initiative. They are receiving assistance in accessing of education, housing, employment, and counseling services.

“We want more people who have ties to groups/gangs in this community to take advantage of the services we are offering,” Capt. Gunther said. “We have numerous examples of local people that turned their lives around. The gun violence in Savannah is not something we can arrest our way out of. The culture in our city has to change.”