“As the SCMPD has revealed in the past and the media has covered during the last 12 months, we have deployed officers in an Anti-Violence Task Force a number of times. Unfortunately, while our brave officers were serving in that high risk deployment, our officers were the victims of the very type of violence they are desperately attempting to protect our citizens from. Four of the brave officers were victims of a violent shooting in which two of the four were senselessly shot.

The two SCMPD officers shot were volunteer members of that Task Force. From a humanistic perspective, in some form, all violence is regrettable. Thus, we are always saddened by the loss of life. But, again, violence in our neighborhoods and community is the very thing the brave men and women who volunteer for this Task Force are trying to prevent and deter.

Members of this task force are among the SCMPD’s finest. Typically, they have volunteered to work long hours beyond their regular work week. They also are working overnight hours and weekends to try to reduce the number of shootings and homicides which are creating fear in our community. They have sacrificed time away from their families to improve our public safety.

With heartfelt regret we suffer with these officers and the community that cries out for an end to the shootings. In our great country, law enforcement is the only vocation or profession that other citizens intentionally and wantonly physically attack. These men were injured while they were trying to stop violent offenders from preying on others. Despite their injuries, we will not drift from our mission of stopping these senseless shootings in our neighborhoods.

We appreciate the outpouring of support that we have received for these officers, and thankfully they are recovering at home now with their families.

As you know, it is the SCMPD policy to request the Georgia Bureau of Investigation to investigate officer-involved shootings and use of force incidents. The GBI’s investigation is ongoing. This policy that requires GBI to investigate use of force shootings will ensure transparency on the part of the SCMPD. We are confident that the body-worn cameras worn by several of our officers involved in last night’s shooting will be instrumental in showing what actually occurred and the real, imminent threat our officers faced.”

Below is the News Release issued today by the GBI: 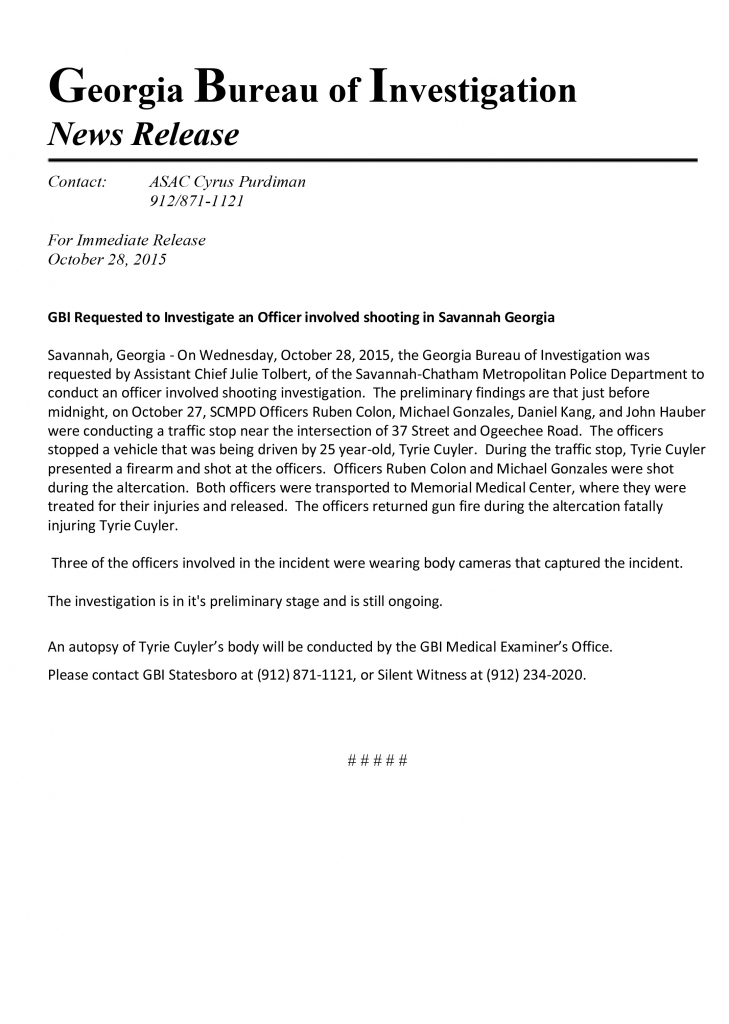