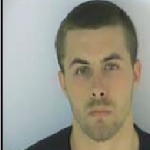 SAVANNAH, GA (January 14, 2015) Metro Detectives have added theft charges against a Savannah man arrested in a SWAT operation Saturday after identifying $20,000 worth of wire found in his residence.

Justin Creed Van Arsdale, 24, now has been charged with theft by receiving after learning that the pickup truck load of wire had been stolen from a Pooler construction site. Detectives from the West Chatham Precinct of the Savannah-Chatham Metropolitan Police Department had asked the public to  help identify the wire after it was discovered following Van Ardsdale’s arrest.

He and Michael Eugene Smart, 28, of Statesboro were taken into custody after a two-hour standoff with members of the Metro SWAT team at Van Ardsdale’s mobile home residence off Quacco Road on Red Cedar Court Saturday morning.

He was treated for the bite wound and transferred to Effingham County. Smart was charged with obstruction and parole violation. He also has two warrants for contempt of court and was being held for Williamson County, IL, authorities.