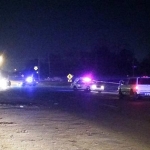 SAVANNAH, GA (December 17, 2016): Savannah-Chatham Metropolitan Police Department’s Major Accident Investigation team responded to a wreck on Bay Street near Kenilworth Street, that resulted in the death of pedestrian, Lessie Owens, 70, at about 6 p.m. on Saturday, Dec. 17.

Metro responded to the scene finding Owens with serious injuries. She was transported to Memorial University Medical Center where she died.

Investigators believe Owens was walking toward the north side of Bay Street near Kenilworth Street. At the same time, Stephen Hammond, 31, was driving east on Bay Street in a 1993 Chevy S10 Blazer. Hammond struck Owens. Hammond remained on-scene waiting for first responders.

Detectives believe low visibility may have been a factor in this incident.