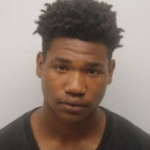 SAVANNAH, GA (May 12, 2016): West Chatham Precinct investigators of Savannah-Chatham Metropolitan Police Department arrested four teenagers in connection with a residential burglary on the 1400 block of Eleanor Street. The burglary occurred at about 11 a.m. on Wednesday, May 11.

Metro officers responded after reports of three males and one female forcefully entering the residence, stealing several items. Several of the items stolen during the burglary were recovered.

Dominique Cutter, 17, along with two additional males, ages 15 and 13, and one 16-year-old female, were charged with 1st degree burglary. Cutter was transported to the Chatham County Detention Center. Per state policy the other suspects who are juveniles were released to their parents.