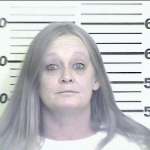 SAVANNAH, GA (October 17, 2014): Savannah-Chatham Metropolitan Police are seeking the public’s help in locating a woman being sought on an aggravated assault charge after a confrontation during a domestic dispute Monday.

The incident occurred on Valentine Drive on Savannah’s south side.

Anyone with information on her location is asked to call Crimestoppers at (912) 234-2020 or text CRIMES (274637) using the keyword CSTOP2020. Tipsters remain anonymous and may qualify for a cash reward.