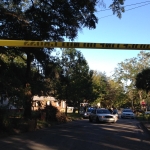 SAVANNAH, GA (October 18, 2016): Savannah-Chatham Metropolitan Police are investigating an attempted burglary and shooting on the 2100 block of Mosley Street, that left a 13-year-old male in serious, but stable condition on Tuesday, Oct. 18.

At about 4:20 p.m., Metro responded to the 2100 block of Hanson Street, where the injured teen was located after reportedly being shot at a residence one block away, on Mosley Street. The teen was transported by ambulance to Memorial University Medical Center for treatment.

Preliminarily, detectives believe the 13-year-old and another unidentified male suspect unlawfully entered a house on Mosley Street, that was occupied by its owner. The homeowner reportedly opened fire, injuring one suspect. Both suspects fled on foot toward Hanson Street. The second suspect remains at large.

One person of interest is being questioned by investigators and is being fully cooperative. Currently, no arrests have been made.