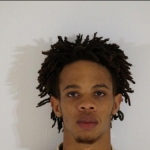 SAVANNAH, GA (December 10, 2014): Savannah-Chatham Metropolitan Police have arrested the suspect in the shooting of a 6-year-old girl during a domestic dispute Nov. 20.

Brandon Maurice Stewart, 20 was arrested this morning by Central Precinct Crime Suppression Unit officers. He was charged with possession of a firearm by a convicted felon and probation violation. He and the child’s mother, Shauneequa Monique Jones, 22, also had been charged with cruelty to children after the shooting in an apartment on Wilder Street.

Jones  had reported  to police that she was walking her daughter to school and heard a noise before she discovered the child had been shot. Police searched their apartment nearby on Wilder Street and discovered the shooting actually took place there.

Jones’ two children have been placed into the custody of the Department of Family and Children Services.