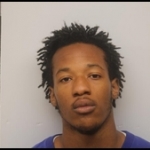 SCMPD arrested Nesbitt Saturday at his residence on the 1700 block of Coventry Street during a Chatham County Sheriff’s Office warrant service for probation violation. Metro was given consent to search the residence where evidence linking Nesbitt to the Bowden Street burglary was recovered. Nesbitt confessed to the burglary when questioned by police.

SCMPD charged Nesbitt with 1st degree burglary for the Oct. 3 incident. On that date, a suspect fitting Nesbitt’s description was seen entering the residence through a window. Several items were reported stolen from the residence. The stolen items were not recovered.