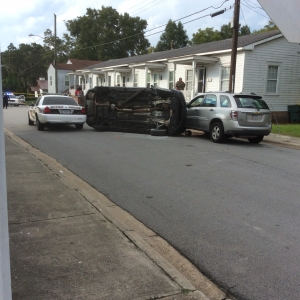 SAVANNAH, GA. (Sept. 17,2014): A suspect is in custody and being treated for possible injuries after crashing a suspected stolen car into a police car, firing shots and surrendering to Savannah-Chatham Metropolitan Police.

Police were searching for the vehicle that had been reported stolen and were moving in on it on West 36th Street near Ogeechee Road when the suspect saw police approaching, entered the vehicle and sped into one of the stopped police cars. The vehicle he was driving flipped on its side and into a parked SUV. The suspect then fired shots before surrendering. No one else was injured.