SAVANNAH, GA (October 10, 2018) – Savannah Police’s Robbery Unit along with the Savannah Office of the Federal Bureau of Investigation (FBI) is seeking information on several carjacking incidents reported in late September.

About 12:20 a.m. Sept. 29, a female victim was walking to her home from her car in the 100 block of E. Jones Street when a young black male, possibly a juvenile, armed with a handgun demanded her keys. Her stolen Honda Civic was located several hours later on Chester Street.

Around noon Sept. 30, officers responded to the 1900 block of Tubman Street after a man reported his Toyota Tundra stolen at gunpoint by three black males who were possibly juveniles. The vehicle was located soon after in Westlake Apartments.

Later that day at 10:15 p.m. three black males with guns approached a victim and his passenger at Montgomery Landings Apartments on W. 57th Street and demanded they exit the vehicle and hand over the keys. The stolen Pontiac Grand Prix was located soon after in another part of the apartment complex.

The incident at Westlake Apartments was captured on surveillance video. It showed the suspects getting out of the stolen Tundra in the area of the apartment complex and getting into what is believed to be a white Hyundai Sonata. The stolen vehicle was recovered by police, but the Hyundai is still at large. The suspects are described as three black males. One was wearing a green, grey and blue Nike windbreaker jacket with a grey shirt underneath. The other suspect was wearing a blue windbreaker jacket with a red shirt underneath, and the third suspect, who was driving the vehicle, was wearing a white shirt around his neck and what appeared to be white basketball shorts.

Robbery detectives and the FBI are investigating possible links between the three cases. 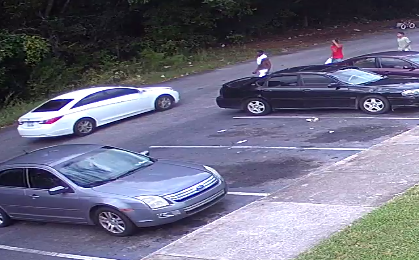