SAVANNAH, GA (November 30, 2017) – Hundreds gathered this afternoon as the Savannah-Chatham Metropolitan Police Department held a promotion and badge pinning ceremony at The Westin.

Robert P. Gavin and Kerry A. Thomas were recognized today for their promotions to the rank of Assistant Chief.

Gavin, who is an Army veteran, began his law enforcement career in 1994 and joined the Savannah Police Department soon after. In his most recent capacity, he served as the Management Services Division commander. Assistant Chief Gavin will now lead the department’s Administrative and Management Operations Bureau, heading the department’s efforts dedicated to systems improvement and quality assurance.

Thomas joined the Savannah Police Department in 1988 and, in his most recent capacity, served as the Patrol Division commander. Assistant Chief Thomas will now lead the department’s Field Operations Bureau, heading the department’s efforts and initiatives to continuously reduce crime.

“This is a noble professional. You are the new leaders,” Chief Lumpkin told the new officers. “To the families of our new officers and our assistant chiefs, thank you for entrusting your loved ones to us and this honorable profession.” 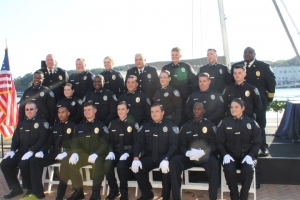