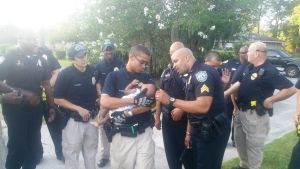 Officer Omar Fernandez was working overnight on patrol for the Savannah-Chatham Metropolitan Police Department July 12 when he joined a vehicle pursuit. During the chase, the robbery suspect crashed the vehicle into a ditch and fled on foot with his infant baby brother.

The suspect left his 6-month-old brother near a fence line and continued to flee on foot. Soon after, the suspect was apprehended, but the baby boy had yet to be found. Officers and firefighters set up a perimeter and began to look for the missing child, walking in a line with flashlights searching the area.

Fernandez and other officers trekked through the woods and thick vegetation in search of the baby. Deeper into the wood line, Fernandez found the child lying on the ground near a shed. He wasn’t moving.

“I didn’t know if he was alive or not. When I saw him, I imagined my youngest lying there,” the father of two sons added.

After jumping the fence, the officer ran to the child and rubbed his sternum. The child began moving and Fernandez felt immediate relief. He lifted the child and supported his head, quickly trying to assess any injuries sustained in the car accident.

In all, the infant spent three hours by himself, as the original call started at 3:45 a.m., and he was found at 7 a.m. Fernandez said the child seemed terrified after the ordeal.

“He was freaking out, looking around, and didn’t know where he was,” he said. “I was looking at his injuries. I could tell he didn’t have any broken bones — a couple of scratches here and there, and he was covered in sand spurs, leaves and trash.”

After calling out to other officers and recovering the infant, the team of searchers gathered around as they waited for the ambulance to arrive. 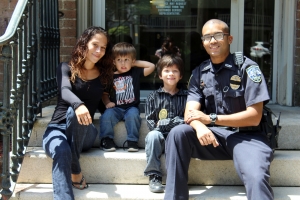 “You could really sense the emotion,” Fernandez said. “Everyone was really happy. The teamwork was great. I almost started crying. Everyone was really supportive [and] it was really motivating.”
Fernandez rode in the ambulance to the hospital with the baby and stayed with him until his parents arrived.

“They were freaking out. The mother was just holding her baby, so I stepped to the side and let them be with their baby. They could have potentially lost their child.”

Fernandez, 26, is a native of New York City and has been with SCMPD for one year and four months.
Why did he join the police force? “Just to do exactly what I did yesterday. That’s why I feel motivated. If you can’t’ call us, who else are you going to call to help out with something like that?”
Fernandez’ wife, Anastasia, is extremely proud of her husband.

“I think it’s amazing,” she said. “I think he plays a dad more than anything. I could literally empathize exactly what he felt when he saw that baby. I know his heart. This is why he joined the police department — to help others and make a difference.”

The baby was kept for observation at a local hospital and then released. The suspect who abandoned him was arrested and charged with robbery by force and child endangerment.

For Fernandez, he says he was just doing his job as an SCMPD Officer.