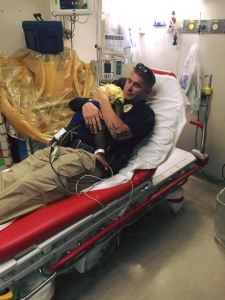 Savannah-Chatham Metropolitan Police Officer James Hurst says he was just doing his job when someone snapped a photo of him comforting a small child at a Savannah-area hospital. The photo, which was posted to Facebook by SCMPD, quickly became a viral sensation and garnered regional and national media attention. To date, the photo has reached more than 200,000 people and has been shared over 1,000 times via social media. The child is currently safe and in good condition.

“I just knew this child needed somebody to be there for him,” Hurst said. “It was just human instinct; humanity. The hospital staff was taking great care of him [but] he was sobbing and crying. I picked him up and within minutes he was asleep on my chest.”

The 16-month-old child was found outside Monday with no adult supervision and taken via ambulance to a Savannah area hospital. Officer Hurst escorted him. During a medical exam, the child became distraught and Officer Hurst, who was still by his side, did his best to comfort the child. The officer stayed with the child for approximately two hours while the medical staff examined him.

Officer Hurst boils it all down to good citizenship in showing care and concern for someone in need. “It’s what we stand for,” he said. “The No. 1 thing is community oriented policing. It’s what we do every day.”

Hurst said he wasn’t expecting this type of exposure, but that there has been a lot of gratitude and thanks toward him. 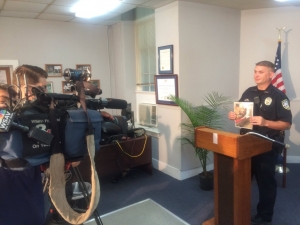 “This job is so much more than catching bad guys,” he said. “We do what we need to do for the citizens. All the officers I work with … would do the exact same thing.”