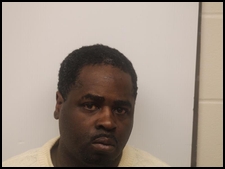 SAVANNAH, GA (February 17, 2016):  Detectives from the Savannah-Chatham Metropolitan Police Department investigated a failed drug transaction turned robbery at approximately 9 p.m., Feb. 16, near a restaurant in the 2700 block of Montgomery Street.

Lloyd Ramon Bellinger, 40, is charged with conspiracy to commit a drug sale of Percocet.

SCMPD patrol officers, K-9, and detectives responded to the scene in reference to a report of an armed robbery. Upon further investigation, detectives determined the robbery was the result of a failed drug transaction.

Bellinger reportedly robbed the female victim with a BB gun and fled the scene. Patrol officers later observed an individual matching the suspect’s description, who was later identified by a witness at the scene.