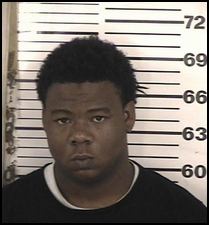 SAVANNAH, GA (February 9, 2016): Savannah-Chatham Metropolitan Police arrested a man at approximately 7 a.m., Feb. 9, at a business in the 200 block of North Lathrop Avenue.

Derrick Briscoe, 32, is charged with aggravated assault and reckless conduct after stabbing a man who had asked him to leave the area. Briscoe was reportedly upset for not being hired for day labor when a physical altercation ensued.