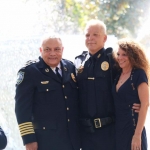 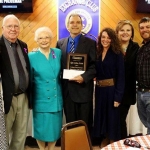 For 27 years, Cain faithfully served the Savannah-Chatham County community as a police officer, most recently in the SCMPD’s Southside Precinct. SCMPD honored Cain as its 2015 Supervisor of the Year. Cain was promoted to lieutenant in November 2016, before officially retiring. 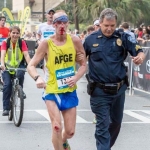 In 2015, Lt. Cain won the hearts of supporters across the globe when a photograph captured in perfect timing showed him helping an injured runner across the finish line during the annual Rock-N-Roll Marathon. Cain later explained that helping the runner, a cancer survivor, cross the finish line became important to him when the runner expressed that he was completing the race to honor his father, who had recently died of the disease.

One month later, Cain learned that he would begin his own fight against pancreatic cancer. Cain fought hard during his year-long battle with the disease.

“The news of Lt. Cain’s passing is deeply saddening to myself, the SCMPD and the community we serve,” said SCMPD Chief Joseph H. Lumpkin, Sr. “During this time of bereavement, I hope his loved ones find solace in knowing that in addition to the commitment to the badge shown to us all on television, his service to this community and pride in his profession was continual. It was shown whether or not the cameras were rolling. I’m proud to have served at this agency with a law enforcement professional such as Lt. Cain. He will be missed.”

Cain leaves behind his loving family, along with a long list of SCMPD colleagues to forever remember his service, selflessness and example.