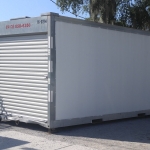 SAVANNAH, GA (July 28, 2016): The first week of July, the Savannah Impact Program (SIP) challenged the community to “Stuff the Container.” For the second year in a row, Savannah College of Art and Design (SCAD) students, faculty and staff took on the challenge by filling 150 backpacks with donated school supplies for local children in need.

Accompanied by project supporters and volunteers, Savannah-Chatham Metropolitan Police Chief Joseph Lumpkin will receive the donation from SCAD President and Founder Paula Wallace, on Monday, Aug. 1 at 1 p.m. at the SIP office, located at 1700 Drayton Street.

On July 1, a storage container was placed outside of SIP’s office with a literal goal of stuffing the container with donated back-to-school supplies, uniforms, toiletries and food items to be distributed to families in need. Items will be distributed on a first-come-first-serve basis during the SIP office’s National Night Out event at 6 p.m. on Tuesday, August 2, also at the SIP office.

Donations of school supplies have been a recurring SIP project since 2011. In 2015, however, the amount of donations declined, prompting SIP to reach out to the public for help. This resulted in an outpouring of support from SCAD, local businesses, faith-based groups, government agencies and private citizens, supplementing donations already received from SIP and SCMPD employees.

“The phone call from SCAD couldn’t have come at a better time this year,” said Cpl. Mark McCartha, organizer of this initiative. “Like last year, donations are coming in at a slower rate this summer. We’re grateful for SCAD’s donation and their continued support, and to all of the people and groups who get involved with this effort to help kids.”

SIP also is collecting non-perishable food and personal hygiene products to donate to the homeless through the Social Apostolate food bank.

Staff will continue accepting donations at the SIP office and SCMPD headquarters from 8 a.m. – 5 p.m. on Monday. Donations also will be received during National Night Out festivities.

SIP is a specialized unit within the Savannah-Chatham Metropolitan Police Department, primarily focusing on high risk and at risk youth and adults. The SIP collaborative is comprised of sworn and civilian police personnel as well as numerous community supervision agencies to include the Georgia Department of Corrections, Board of Pardons and Parole, Chatham County Juvenile Court and the Department of Juvenile Justice.