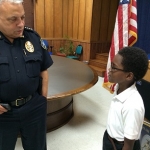 SAVANNAH, GA (September 9, 2015) –The Savannah-Chatham Metropolitan Police Department and Chief Joseph H. Lumpkin, Sr. had the privilege this afternoon to recognize a 9-year-old Savannah boy for his courage and character.

On June 21, 2015, Masyah noticed three individuals leaving a nearby home with a flat screen television and other property. After they jumped the fence and ran away; Masyah immediately told his grandmother what he had just witnessed.

The grandmother called police and Masyah was able to give a detailed description of the suspects to the responding officer, Officer Josh Calvert. Other officers in the area were able to locate the three individuals based on Masyah’s description.

A few weeks later, two the suspect pled guilty to burglary charges and Masyah testified against the third who was also ultimately convicted.

“His recollection of the incident was better than that of many adult witnesses I have interviewed,” Officer Calvert said. “He is an extremely bright young man who impressed everyone involved in this process. We are glad to have this junior crime-fighter on our team.”

Chief Lumpkin added, “The behavior we recognize and honor today is citizenship at its finest. We can all learn from this young man for his behavior is exactly the type of conduct we need from our citizens to eradicate crime in Savannah-Chatham County. This young man did not just talk about doing something about crime, he did something about crime!”

“We have constantly asked our public: ‘If you see something, say something.’ This is what we need to prevent and eradicate crime,” said Chief Lumpkin.

Chief Lumpkin presented Masyah with the Chief’s Outstanding Youth Award medal, a framed certificate, a junior SCMPD badge and other gifts to keep inspiring his desire to help police officers.

Masyah said when he grows up he wants to be a police officer.