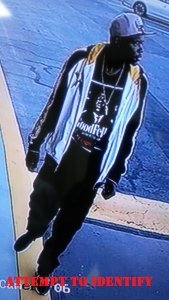 At about 6:30 p.m., Metro officers responded to  the scene in reference to an armed robbery call. Reportedly, two male suspects flagged down the victim, asking the victim for a ride. The victim consented to give the suspects a ride, but during the drive was robbed of cash. The suspects then fled the scene.

One suspect is described as a black male in his 20s, standing 6-feet tall and weighing around 150 pounds. He wore a race car jacket and tan pants. He possibly may have a discolored bottom lip and dreads.

The second suspect is described as a black male in his 20s, standing about 6-feet tall and weighing around 140 pounds. He wore a Chicago Bulls hat, grey jacket and black pants.