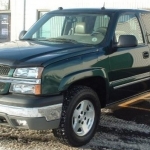 SAVANNAH, GA (August 15, 2016): Savannah-Chatham Metropolitan Police Department’s Robbery Unit asks the public’s help in the search for the suspects and vehicle involved in a recent home invasion on the 300 block of Brown Thrush Road.

Both suspects are described as black males with dark complexions. One suspect is tall and in his 20s or 30s.The second suspect may be a teenager. Both suspects are believed to be armed and dangerous.

Detective believe the suspects fled the scene in a green 2003-2006 extended cab Chevy Silverado Z71, with a silver or grey stripe at the bottom and silver factory rims.