At about 10:30 a.m., Metro officers responded to Walmart in the 1400 block of Abercorn Street for report of a shoplifting. Reportedly, the male suspect stole two televisions worth around $1,700. He then left the scene in a black Chrysler 300.

The suspect is described as a white male standing around 5-foot-7-inches. During the incident, he wore a black and 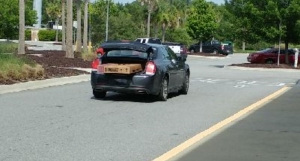 and may qualify for a cash reward.