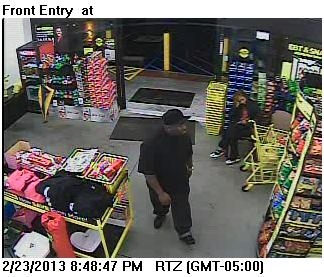 Savannah-Chatham Metropolitan Police are requesting the public’s help in identifying and locating two suspects involved in an armed robbery in west Savannah.

Just before 9 p.m. last Saturday, surveillance cameras captured a gunman and his accomplice entering the Dollar General on the 2100th Block of West Bay Street. The gunman jumped the counter, demanding cash from two employees. Both suspects left the scene in a dark colored vehicle, heading eastbound on West Bay Street from Tuten Avenue. The suspects later abandoned the vehicle in the Downtown area.

According to witnesses, the gunman has a slender build and is approximately 5’10” in height. During the robbery he wore all black clothing and a black ball cap. His face was partially covered.

The second suspect is described as having a heavy build and is approximately 5’10” to 6’ in height. He wore all black clothing and a black ball cap as well. Both suspects are described as black males.

A confidential tip line also is open directly to investigators at (912) 525-3124. Callers preferring to speak directly to the detectives without reward potential can arrange private discussions.