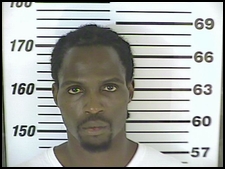 Maurice Jamar Bentley, 31, is sought for the Christmas Eve murder of Michael John Polite. Polite was shot and killed on December 24 in the 800 block of Elliott Avenue. Polite, 38, was a father of four.

Bentley, 31, is a black male with a dark complexion. He is approximately 5-10 and 145 pounds with a thin build. He was last known to have longer length braided or corn-rowed hair, but possibly has cut it. He is also a registered sex offender.

Police ask anyone with knowledge of Bentley’s location to call Emergency 9-1-1 or the Violent Crimes office at (912) 525-3124 immediately. Maurice Jamar Bentley should be considered armed and dangerous and should not be approached.

Anyone with information on the case may call Crimestoppers at (912) 234-2020 or text CRIMES (274637) using the keyword CSTOP2020. Tipsters to Crimestoppers remain anonymous and may qualify for a cash reward.