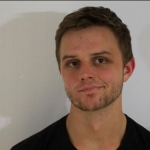 At about 11:45 p.m. Metro responded to Candler Hospital’s Emergency Room following reports that a male subject believed to be

Lee drove to the hospital, left Donnelly, then drove away. Hospital staff confirmed that Donnelly was deceased upon arrival.

SCMPD investigators seek to question Lee concerning this case. Lee is described as a white male standing 5-8 and weighing 150 pounds. He has short brown hair and wears a thin beard and mustache. Lee is known to frequent the Eagles Nest Drive area of Tybee Island and areas of East Savannah along Skidaway Road.

Circumstances surrounding Donnelly’s death remain under investigation. The Georgia Bureau of Investigation will perform an autopsy to determine the cause of death.

This investigation continues.  Anyone with information about this case should contact the SCMPD tip line by dialing (912) 525-3124.