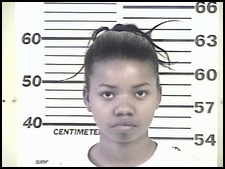 SAVANNAH, GA (May 30, 2013): Savannah-Chatham Metropolitan Police have issued warrants for the arrest of a Savannah woman wanted for drug trafficking.

Last Friday, 26-year-old Ashley McClendon’s residence was one of several units searched in Yamacraw Village by Metro detectives during a shooting investigation. Inside, investigators found a bag of crack cocaine along with multiple scales.

McClendon is described as a black female with black hair and brown eyes. She stands about 5-6 and weighs 115 pounds. McClendon is known to frequent Yamacraw Village and was last known to work at the McDonald’s on the 2000 block Skidaway Rd.