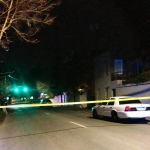 Reportedly, Sellers was walking south on Whitaker Street when a male subject approached him and engaged in conversation. Upon approaching West Gordon Lane, a second male subject with a gun reportedly demanded Sellers’ possession. Sellers complied. Sellers was reportedly pistol whipped and shot before the two suspects left the area. The suspects may have fled in a black 90s model minivan.