The Leadership in Police Organizations (LPO) development training in the SCMPD is focusing on sergeants and lieutenants as well as specific civilian employees at this point. It will be expanded to all SCMPD officers and civilian employees within 12 months. It is being presented by trainers from the International Association of Chiefs of Police (IACP). 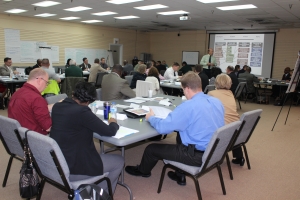 “Leadership can not be confined to the upper ranks of a police department. Every officer must become a leader and take a leadership role at their own level,” Lumpkin said. “Our intention is to create a culture throughout the department that is supportive of dispersed leadership.”

Lumpkin, in his 15th week at the helm of the department, immediately focused on sergeants and lieutenants because officers in those ranks are being considered now for promotions.

“This course is designed to help develop competence and reinforce character for every member of this department, sworn and civilian,” Lumpkin said. “When we have both character and competence, we will gain trust among the members of the department and our community. That trust is crucial to providing a safe Savannah and Chatham County.”

The original course material was developed at the U.S. Military Academy at West Point. The curriculum was specifically tailored through years of research and development to meet the challenges of law enforcement. Since 2005, it has been presented to more than 300 local, state, and federal agencies in 38 states and abroad.

The LPO program is based on a behavioral science approach and the art of leadership in leading people, groups, change, and organizations, and was piloted by the IACP in 2005. This is the first week of a three-week training session for SCMPD’s first LPO class. It will resume for a week each in March and April.