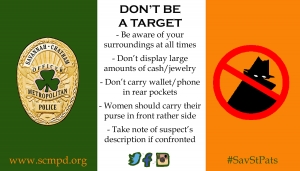 SAVANNAH, GA (March 18, 2016): Unfortunately, the “Luck of the Irish” wasn’t with everyone attending Savannah’s 2016 Saint Patrick’s Day celebration this year, so the Savannah-Chatham Metropolitan Police Department wants to warn the public of a few potential pitfalls.

With just 10 arrests Thursday inside the boundaries of the St. Patrick’s Festival Control Zone, SCMPD officers and partner agencies continue to monitor the 2016 celebration to ensure a fun and safe time for everyone.