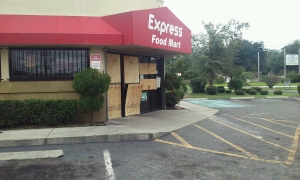 At 8:20 a.m. on Saturday Downtown Precinct officers arrested William Larry Bennett, 20, and Melvin Key Hutcheson, 42, after they tried to break into the 3G convenience store on the 700 block of Wheaton St. Bennett and Hutcheson first tried to pry the plywood off the front of the boarded up business. When officers showed up they caught them trying to break into the back of the store.

At approximately 9:50 a.m. on Saturday members of Metro’s Aviation Unit were at the hanger on Dean Forest Road when a burglary-in-process call was dispatched. Two officers responded to the Exxon gas station on the 4800 block of Highway 21 in Garden City. The front of the store had been broken into and officers detained Amy Lynn Bouvette, 46. She was found with two bags of merchandise including lottery tickets, beer, cigarettes, and food. Bouvette was arrested and charged with Burglary.

The SCMPD responded to all critical priority calls throughout Chatham County during the most intense hours of the hurricane.

Chief of Police Joseph H. Lumpkin, Sr. is urging citizens to stay inside and remain vigilant. “We need the community’s help to maintain order,” he said. “I am asking citizens to call 911 if they notice any suspicious activity that may lead to burglaries, thefts, and robberies or looting. Our number one priority is to protect life and property.”

Members of the Georgia National Guard have been assigned to every precinct to help prevent break-ins at homes or businesses.