SAVANNAH, GA (August 19, 2016) – The Savannah-Chatham Metropolitan Police Department has recently encountered two individuals who showed signs of being under the influence of synthetic hallucinogenic drugs.

The most recent dangerous synthetic cathinone drug to make headlines is called alpha-pyrrolidinopentiophenone (alpha-PVP). Its street name is “Flakka.”

“We are working with local doctors to educate the public about this dangerous drug, which is posing a danger to our citizens and our police officers,” said Maj. Kerry Thomas, commander of SCMPD’s Patrol Division. 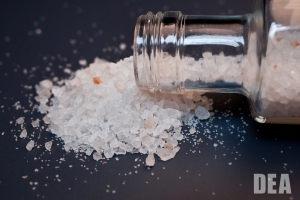 Flakka is a new synthetic drug similar to bath salts, pictured above.

SCMPD officials believe Orenda Odum, who was arrested for vandalizing a church Aug. 14, was under the influence of the drug, as well as Brandyn Johnson, who was arrested Aug. 18 following a violent rage that injured officers and a citizen. Both of the suspects in these Savannah arrests were extremely violent with officers. Johnson was seemingly un-phased by a Taser, pepper spray, and muscling techniques.

A Florida college student is accused of killing a couple and stabbing another man in Tequesta, Florida, Aug. 15 while allegedly under the influence of Flakka. Officers found the suspect biting the face of one of his victims.

“If you’re not doing it, don’t experiment. If you see someone doing it, it’s a matter of getting help. Separate yourself from the threat, get first responders there immediately so we can deal with the subject, subdue him and also begin to give medical treatment.”

“This drug is a serious drug,” he said. “It’s got serious life-threatening potential,” said. One dose of this drug can cause your life to change forever where you will never be the same.”

Fellow MUMC physician Dr. Joseph Hogan warns that synthetic drugs such as Flakka and bath salts are completely unsafe to even experiment with.

“It’s dangerous because you lose control of your ability to interact properly and act on possible other stimuli that aren’t there. You can actually develop a high temperature, cardiac arrest or death,” he said.

In Savannah, Hogan said he and his staff have occasionally dealt with patients who were under the influence of these types of hallucinogens.

“They’re all medicines that give you a similar high that is consistent with cocaine or amphetamines. It can make you psychotic. If they don’t have a psychiatric history, but they’re just bizarre, altered or agitated you have to consider drug abuse,” he added.

According to the National Institute on Drug Abuse, Alpha-PVP is chemically similar to other synthetic cathinone drugs popularly called “bath salts,” and takes the form of a white or pink, foul-smelling crystal that can be eaten, snorted, injected, or vaporized.

Like other drugs of this type, alpha-PVP can cause a condition called “excited delirium” that involves hyper-stimulation, paranoia, and hallucinations that can lead to violent aggression and self-injury. The drug has been linked to deaths by suicide as well as heart attack. It can also dangerously raise body temperature and lead to kidney damage or kidney failure.

The Savannah cases remain under investigation by SCMPD. Anyone who with any information on the use or distribution of these dangerous drugs should call the SCMPD tip line at (912) 525-3124.