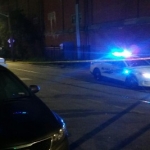 SAVANNAH, GA (October 30, 2016): Savannah-Chatham Metropolitan Police Department’s Violent Crimes investigators seek to identify the suspect in a shooting on the 600 block of West River Street, that injured one man on Sunday, October 30.

At about 3 a.m. Metro responded to the scene, finding Adam Woodworth, 24, with a non-life threatening gunshot wound. He was transported by ambulance to Memorial University Medical Center for care.

Reportedly, Woodworth intervened when he observed a co-worker being assaulted by a group of suspects behind the business. One suspect discharged a firearm, striking Woodworth. The suspects fled in a car, last seen traveling east on River Street.