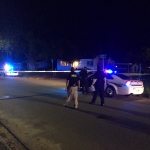 SAVANNAH, GA (September 18, 2016): Savannah-Chatham Metropolitan Police Department’s Violent Crimes detectives have launched an investigation into a shooting on Saturday, Sept. 17 at a residence on the 2500 block of New York Avenue.

Metro responded to the scene at about 8 p.m., locating shooting victim, DeAndre Newton, 30, at his residence. Newton was transported by ambulance to Memorial University Medical Center with non-life threatening injuries.

Hours earlier, Metro responded to a disorderly person report at the same residence involving Newton and an adult female victim. Newton reportedly fled before police arrived. Detectives believe this shooting may have stemmed from the earlier incident at Newton’s residence.

While working to confirm the identity of the suspect, detectives also seek to locate Newton’s brother-in-law Bilal Henderson for questioning. Henderson is described as a black male, standing 5-5 and weighing about 150 pounds. Henderson has dreadlocks and gold teeth. He may be driving a silver Chevrolet Monte Carlo.

Thus far, parties believed to have knowledge of this incident have not cooperated fully with detectives.