UPDATE: The Southeast Regional Fugitive Task Force of the U.S. Marshals Service and Savannah-Chatham Metropolitan Police arrested Deandre Glover, 18, at about noon on Tuesday. Glover was taken into custody at Fred Wessels Homes. He is charged with murder in the November 2015 shooting death of Mario Williams, 29, on the 700 block of Wheaton Street. 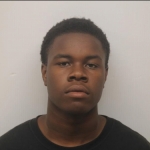 SAVANNAH, GA (December 2, 2015): Savannah-Chatham Metropolitan Police Department’s Violent Crimes detectives have obtained warrants for the arrest of Deandre Glover, 18, in connection with the November shooting death of Mario Williams, 29 at a gas station on the 700 block of Wheaton Street.

Glover faces murder charges and is considered armed and dangerous. Glover is described as a black male standing 5-7 and weighing roughly 150 pounds. He has short black hair and brown eyes. Glover is known to frequent Savannah’s Westside.

Anyone who sees Glover should call 911 immediately and avoid approaching him.

Brandon Miller, 26, was arrested on Dec. 15 and charged with felony murder and robbery in this  case.