At around 9:45 p.m., the suspect entered the KFC on the 400 block of W. Gwinnet Street and brandished a weapon. The suspect demanded money from a store employee, but the employee did not comply. Soon after, the suspect fled the scene.

The suspect is described as a black male in his late teens, standing 5-foot-8 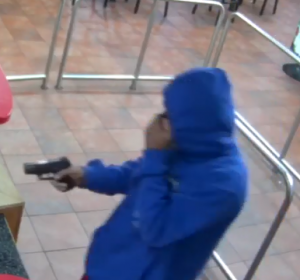 with a slender build. He was wearing a blue hoodie, red pants and blue and red tennis shoes.

Anyone with information on the suspect is asked to call  the SCMPD tip line by dialing (912) 525-3124. Information may also be forwarded to CrimeStoppers at (912) 234-2020. Tipsters remain anonymous and may qualify for a cash reward