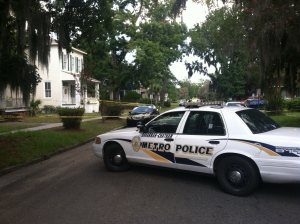 SAVANNAH, GA (July 22, 2017) –  SCMPD’s Violent Crimes detectives have arrested a suspect in a cutting that stemmed from a dispute at a E. Duffy Street residence.

Herbert Ledford, 32, was charged with aggravated assault, aggravated battery and possession of a knife during the commission of a crime.

An investigation revealed Ledford and Ricky Chaffin, who both reside at a residence in the 1200 block of E. Duffy Street, were involved in a dispute around 3 p.m. today when Ledford used a knife to injure Chaffin. Ledford, who also received cut-related injuries from the incident, turned himself in to officers upon their arrival.

Both men were treated for non-life-threatening injuries.