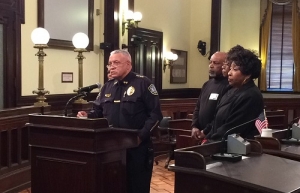 SAVANNAH, GA (February 25, 2015) Following today’s grand jury announcement, the statements below were made by Mayor Jackson and SCMPD Chief Lumpkin.

The Grand Jury today issued a recommendation to the District Attorney in the case of one of our Police Officers and his involvement in the death of one of our citizens.

I am not here to comment whether that was the right decision or the wrong decision. I am here to say that this is a decision that we as citizens must respect.

Our District Attorney placed this matter in the hands of 23 citizens whose backgrounds represent the diversity of Savannah. The members of this Grand Jury are our neighbors, and our co-workers. They are the people we see every day.

These citizens have dedicated their time to serve on the Grand Jury, to carefully consider all information, and to make a recommendation on how to move forward. I thank them for this important public service.

I am proud of how our community has responded since that terrible day on September 18th in West Savannah. Our community advocates have made their concerns heard, while remaining civil and responsible. Our clergy have stepped forward, and led by example. Our Police have acted as professionals, respecting the rights of demonstrators while keeping our community safe.

Today the Chatham County Grand Jury released its findings on the officer-involved death on September 18, 2014. The Savannah Chatham Metropolitan Police Department expresses its sympathy to all families impacted by this incident.

From the moment of this incident, the Savannah-Chatham Metropolitan Police Department under the leadership of Chief Julie Tolbert pledged that it would be a transparent investigation, that we’d turn it over to external experts, and that we would cooperate fully.

Now that the Grand Jury — citizens of our county and city — have spoken and made their decision based on facts, physical evidence and forensics, we in the Savannah-Chatham Metropolitan Department call upon all our citizens, our entire community to continue to be objective and process this decision in an objective manner. There was an extensive investigation by the Georgia Bureau of Investigation. There was a transcripted Grand Jury process. The District Attorney spent a significant period of time preparing and presenting all known facts.

We ask for peace and tranquility from all citizens as the Savannah-Chatham Metropolitan Police Department maintains the peace, protects our citizens, and maintains order.