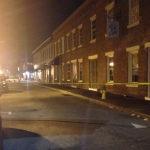 West Congress Street, that injured a man on Sunday, October 30.

At about 3:15 a.m. Metro officers responded to the scene, where Shikael Vallaplor, 22, approached them with visible injuries. He was transported by ambulance to Memorial University Medical Center with non-life threatening injuries. Officers closed City Market and Ellis Square during the investigation.

Vallaplor was reportedly, stabbed during a fight in City Market.  Suspect identities and events leading up to the fight remain under investigation.